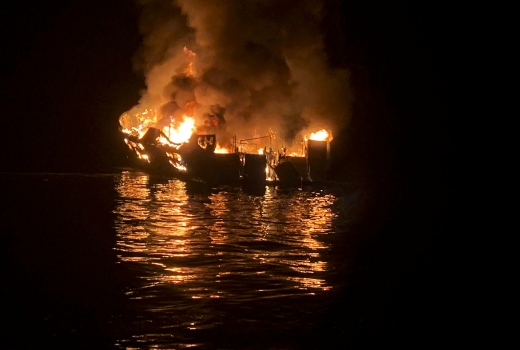 Historically, the incidence of fires aboard vessels near the coastline in California has been low, comparatively, to the total call for service volume of local fire service delivery. The irregular level of activity may have contributed to this false sense of security for firefighters charged with marine firefighting responsibility. Many local jurisdictions outside of California in the US have taken significant action to develop sophisticated program for the training of land-based firefighters in marine firefighting following the withdrawal of active mission support by the US Coast Guard in the 1980s. The failure of State Fire Training (SFT) to design and develop a modern curriculum for land-based firefighters to properly fight fires in the marine environment, and the implications of such following the seminal event involving the Santa Cruz/Conception dive boat fire suggest this can no longer be tolerated.

The fire service has historically accepted many duties involving disciplines outside of firefighting, perhaps due to the geographical distribution of fire stations across the landscape. This distribution permits a reduces travel time of trained people to the scene of an emergency following notification. Some of these duties are more recognizable such as emergency medical service (EMS), hazardous materials response (Haz-Mat) and perhaps Urban Search & Rescue (US&R). Other response activities are less known to the public, such as rope rescue, ice rescue, et al. Other duties such as Search & Rescue are a primary duty of law enforcement. Each of these common emergency activities are often accomplished by the fire service but are sometimes done by agencies, both public and private, outside of the fire service. This is understandable given that when a member of the public makes a request for emergency service a timely response from the authority having jurisdiction (AHJ) is expected.

The development of firefighting training in California is the express duty of SFT, a division of the Office of the State Fire Marshal. Nature abhors a vacuum, and due to the failure of SFT to develop a comprehensive program for firefighting in the marine environment other disciplines have filled the gap with a marine firefighting program not approved by SFT and not developed by firefighters in what is one of the most dangerous of firefighting activities.

The US Constitution provides the states police power that enables each state the authority to provide for the health and safety of the public. In California the AHJ is given the explicit control of how this is accomplished in emergency situations under the Emergency Services Act. Further, each jurisdiction along the coastline in California extends a three mile boundary beyond the mean high tide line into the ocean or other open water such as a bay. This authority cannot be abdicated unless expressly done so by the AHJ. The duty and responsibility of a fire service agency along the California coast extends into the open water for three miles from the shore.

California law under the Harbors & Navigations code mandates that the local sheriff’s department maintain capability to provide aid and assistance to persons in the coastal waters, but does not provide for firefighting. This suggests that each local government agency along the coastline in California has a responsibility to the public to maintain some plan for marine firefighting within the three mile coastal zone.

California Occupational Health and Safety (Cal OSHA) stipulates that, in the workplace, workers must be provided with proper training and protective equipment for dangerous duties. The marine environment and vessel firefighting are unique as compared to land structural firefighting activities as there are numerous challenges found in the marine environment not found on land, i.e., confined space, redundant electrical systems, rotating mass below the waterline, large quantities of fuel, limited fire prevention regulations, et al. Taken in total is it clear that firefighting fire on a vessel away from the shore provides many challenges not found on land. Because land-based firefighters will provide the workers to fight a fire in the marine environment, and the lack of a SFT approved plan to train these firefighters currently exists, it is foreseeable that a Santa Cruz/Conception dive boat incident proximal to the coast would be devastating for the fire service as well as any victims.

I have been championing the idea that SFT develop a curriculum for firefighting in the marine environment for land-based firefighters for ten years. I ask that you schedule this idea for discussion at the Statewide Training Education and Advisory Committee (STEAC) as soon as reasonably possible so as to properly address this gap in the training of firefighters in the protection of the public.